www.alanwake.com
Remedy Entertainment have stated on numerous occasions that "more Wake is coming" in their twitter and facebook accounts, but more specifically in the credits to Alan Wake's American Nightmare.

Throughout 2011 and 2012, several hints have been dropped of a potential sequel to Alan Wake. These hints include when "Alan Wake 2" was shown on Althea Suarez Gata's CV, only for it to be removed on the very same day. Whilst Alan Wake's American Nightmare (though the name was unknown at the time) was revealed not long after this hiccup, fans have been trying to find more evidence of a direct sequel.

Few pieces of evidence have surfaced. Firstly, in Alan Wake's American Nightmare, there is a song known as Balance Slays the Demon. Near the middle of the song, there is a weird sound clip that can be heard, but it has been reversed. If the clip is played forward, it says "It will happen again, in another town, a town called Ordinary". The credits to the game also then indicated that "Alan Wake's journey through the night will continue".

On June 2, 2012, Sam Lake then tweeted the exact same line that was reversed in the song "Balance Slays the Demon", where the tweet read "It’s all true. It will happen again, in another town, a town called Ordinary. It's happening now."

This has since been revealed to refer to Remedy's 2019 game Control, whose main protagonist, Jesse Faden, becomes involved with the Federal Bureau of Control and what have come to be known as Altered World Events (AWEs), one of which occurs in Jesse's hometown of Ordinary, WI.

Lake's 2012 tweet also linked to a "Blogspot" called "This House of Dreams". At first, the site seems like a mere blog for someone refurbishing a house, but one such blog talks about a dream the blogger had about a man "wearing a funny jacket with old-fashioned elbow patches" and that he wanted "to turn all the lights on". This tweet came just days before E3 2012, a gaming expo that reveals and shows brand new content of upcoming releases. People also found that the domain "alanwake2.com" was also reserved by Remedy Entertainment.

At the Xbox Event on May 21, 2013, Remedy revealed Quantum Break, which would be an exclusive to the newest Xbox console, Xbox One. On February 2016, it was confirmed that it would also come to PC. Fans were disappointed that Alan Wake 2 wasn't revealed, however some still supported Remedy in their new franchise.

A day after the Quantum Break announcement, Sam Lake took to YouTube to talk to the fans about why Alan Wake 2 wasn't announced. He revealed that the time just wasn't right yet, but mentioned he has not given up on the franchise.

In April, 2015 Remedy announced that Alan Wake 2 had gone into the early stage of development shortly after Alan Wake was released. A video of prototype demo was also released. While in the stage of showing this demo to publishers Remedy went into conversations with Microsoft and the project was put on hold indefinitely while Quantum Break went into development. The sequel would have introduced new features, many of which were used in Alan Wake's American Nightmare. When asked about the possibility of an Alan Wake sequel being released in the future, Sam Lake replied, "It's hard to guess," but that he would "love to do that".

On 12 September 2018, Variety exclusively announced a TV series was in development. The TV show, which currently does not have a release window, will be adapted by 'Legion' and 'Cloak and Dagger' Executive Producer Peter Calloway. Creator of Alan Wake franchise Sam Lake also signed up as executive producer.

Tomas Harlan, a partner of the studio named Contradiction Films tasked in developing it said "Alan Wake was basically a TV series that was put into a game. That was Sam’s vision. It was influenced by ‘The Twilight Zone,’ ‘Secret Window,’ Hitchcock, ‘Northern Exposure,’ a lot of U.S. television. We plan to work closely with Sam on our this show. Sam is a huge part of this. This is his baby.”

Sam Lake previously stated back in 2015 a sequel had previously been in development but it never came into fruition. "Definitely what we have mapped out is a longer thing than the first game and a sequel; there is more to it,” Lake said. “In many ways, we see the universe as a bigger thing. Alan Wake is a very central character, but we have other characters around him like [friend and agent Barry Wheeler] and his wife Alice and Sheriff Sarah Breaker and other characters there. We feel this is a big universe to develop and explore in many ways. At the moment, there is no news of any further ‘Alan Wake’ games. As before, we’re exploring these possibilities and hoping to make it happen when the time is right.”

Meetings to try and get the show made are due to start within the next couple of weeks. At a best guess, we could be looking at the show being made for late 2019 or early 2020.

According to easter eggs found Remedy's 2019 game Control, it is revealed that this game shares the same universe as Alan Wake. Two typewritten pages found within the game--and which are said to have been written by Alan Wake himself--heavily imply that ten years have passed since Alan's experience in Bright Falls, and that it was not an isolated event, but rather what the Federal Bureau of Control classifies as an "Altered World Event" (AWE).

In this way, Control reveals additional information about the events involving the Dark Presence, especially given the nature of its own primary enemy, The Hiss.

Furthermore, an expected DLC will be released in mid-2020, with the title Expansion 2: AWE. While the letters may simply stand for "Altered World Event," it is worth noting their resemblance to Alan's own name. In addition to this, the top-half of the cover art depicts a flashlight-wielding person in a dark forest, while the bottom-half depicts a second figure surrounded by red, which figures prominently with The Hiss in Control.

In an interview given on May 14, 2020 with VG24/7, Sam Lake commented on this, explaining, "Through AWE you’ll learn more about the Bureau’s involvement, research, and interest in Alan Wake and the events that took place 10 years ago,” Lake said. “We’re really happy to give fans of the original game a bit more of Alan Wake-related content."[1]

This suggests a deeper connection, possibly even a future crossover, between the events of Control and Alan Wake.

At the end of the second expansion for Control, titled AWE, an alarm sounds in the Federal Bureau of Control that another AWE appears to be happening again in Bright Falls. This, along with Alan's narration, seems to indicate Remedy's next game could be a follow up to Alan Wake.

In March 2020, Remedy signed a deal with Epic Games to publish two single-player games under Epic's new publishing initiative. The games were said to be part of "the same franchise". In March 2021, Remedy CEO Tero Virtala confirmed that they were indeed working on two unannounced project with Epic Games that are part of the same franchise, one smaller scale and one AAA in size.

In April 2021, GamesBeat reporter Jeff Grubb told viewers that "I've heard that Remedy is going to be making Alan Wake 2," as part of the Remedy-Epic deal. Grubb went on to say that the game "should kind of be the follow-up that fans of that series want," but that there's little extra information and no word on an official announcement.

On the 7th September 2021, Alan Wake Remastered was revealed by Sam Lake, of which some people believe to have been the smaller project mentioned in March 2021, and the other AAA from the same franchise is to be Alan Wake 2. With the reveal of Alan Wake Remastered, to try and get more interest in the franchise, a sequel is looking more and more likely. 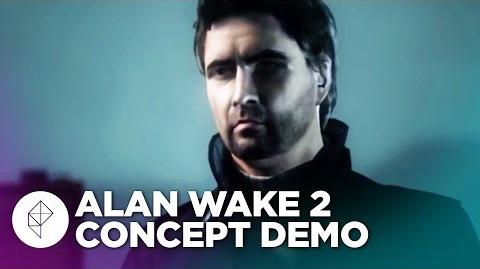