Beyond the shadow you settle for, there is a miracle illuminated.

Thomas Zane is a protagonist and character of the Alan Wake franchise.

He was a bestselling poet who visited Bright Falls in the 1970s, where he became inspired to write poems that affected reality. He owned the Bird Leg Cabin on Diver's Isle, the same cabin that Alan Wake stays in during the Alan Wake game.

Thomas Zane was a well-known poet before his death. He wrote about creatures and Cauldron Lake with the help of his lover, Barbara Jagger, who acted as his inspiration and muse. One morning, Barbara went swimming and drowned under mysterious circumstances. After she died, his assistant writer, Emil Hartman, convinced him to write her back to life using the supernatural power of the lake to turn fiction into reality.

Although Zane was successful, the Dark Presence came back with her, possessing Barbara's body. When he realized that the Barbara that lived with him was not the real one, he cut out her heart, finding only darkness within. He wanted to make sure that everything that caused these events was destroyed, and thus used the power of the lake to write himself, the island, and everything else involved out of existence entirely. This was likely the cause of the 1970 eruption of the Cauldron Lake volcano.

However, as a contingency, Zane also wrote that any of his belongings left in a shoe box would remain in the real world. He used the lake's power to write a character called Alan Wake, who would someday come to Cauldron Lake and defeat the Dark Presence using a light switch called the Clicker imbued with magical power. Zane wrote that Alan had nightmares and a fear of the dark as a child; to help him overcome his fear, Alan's mother gave him the Clicker, pretending it was magical and it could defeat the monster from the dark. The page then said Alan remembered this when years later he stood at the bank of Cauldron Lake holding The Clicker in his hand just as he was about to jump into the Lake to defeat the Dark Presence.

Zane then put on his diving suit, took the possessed Barbara, and jumped into the lake, diving deep into the interdimensional Dark Place beneath it. Zane sacrificed his own human body to the Bright Presence, and it and the Dark Presence rose to the surface of the lake to continue their conflict. The spirits of Thomas and Barbara, meanwhile, descended ever deeper into the Dark Place, where Zane recited a final "master poem." In doing so, he created a "baby universe" where he and Barbara continued to live happily ever after.

In the game, Zane appears as the Bright Presence that helps Alan. Alan wrote Thomas Zane into the story to stop Alan from completing the manuscript by shining his light on him. Alan said that his act has plunged Thomas even deeper into the nightmare the Dark Presence keeps him in. He later appears to Alan as a shining light and in the final episode as a diving suit with a bright light shining out of the helmet. Although far weaker than the Dark Presence, he is capable of suppressing and warding the Dark Presence away. He is also capable of removing the Dark Presence's poltergeist abilities just by appearing.

Zane makes his first appearance in Episode 1, where he appears in Alan's nightmare. Zane appears as a bright, shining light in the sky who saves Alan from the murderous hitchhiker by shining light over a house Wake is trapped in. This causes the hitchhiker to retreat. Zane provides light for Alan, healing him. Afterward, Zane gives Alan a message in poetry:

Wake does not understand this, but Zane moves on. He quickly teaches Alan how he will fight with the Taken, which he will have to do in real life. Zane supplies Alan with a high-powered revolver and a flashlight, and then leaves, giving Wake back his dream.

As the game unfolds, Zane's presence becomes more and more felt. He is responsible for leaving the manuscript pages for Wake to find, scattering them through the trails that Wake will take. He may be behind the Safe Havens that Wake takes cover in, seeing how once in a while, a light pole will turn on unexpectedly.

Eventually, Wake pieces together what happened on the night his wife Alice was taken away. When the Dark Presence, in the form of Barbara Jagger, tricked Wake into writing a horror story for it, Wake became aware of its goal to kill everyone in the town (and possibly take over the world). Knowing that he could not get out himself, he wrote Zane into the story to come and free him with his power, and then take the manuscript pages and help him reveal the Dark Presences intentions to himself. Thomas did like the story asked, and used his power to drive the Dark Presence away from Bird Leg Cabin. He then freed Wake, and took the manuscript pages just as Barbara Jagger reasserted herself in the cabin. Zane escaped, and then proceeded to help Wake throughout the story.

It is revealed that Zane has created a weapon for Alan to end the Dark Presence with, the Clicker. When Alan was a young boy, his mother gave him a broken-off light switch, which he named The Clicker. Every time Wake would push the button, an imaginary light would turn on, and the "monsters" would go away. When Wake enters the Well-Lit Room with his friends, he amazingly finds the Clicker. Wake then set out to destroy the Dark Presence by diving into Cauldron Lake and ending Barbara Jagger.

As Alan succeeds in reaching the lake and diving in, Zane floats around in the water slowly around Alan, where he tells Alan to use the clicker to destroy Barbara Jagger, to "fill her heart with light." Before leaving, he shows Wake Mr. Scratch, a doppelganger of Wake. Mr. Scratch is an anomalous creation of the Dark Presence that will take Wake's place in the real world. Zane then leaves abruptly, leaving Alan to kill Barbara Jagger and write the ending to the story.

Zane later reaches out to Alan who has become trapped and lost in the Dark Place, warning him that he should not go any further. He shows him a video of Alan struggling with reality and even telling of recent events. Later, he and Alan meet each other in Alan's own home, tells him its not the Dark Presence that's causing this but himself is responsible for making this happened: he is trapped in his own nightmares and fighting himself. After Alan angrily refuses to believe he is indeed responsible for this, Zane is forcibly pushed away before Alan's battle with the televisions.

Zane appears as a light through a window at Cauldron Lake Lodge, informs Alan that he must reach the Lighthouse and by giving him a manuscript page allows him to bring out words to form a path. He also tells Alan that he is the part of Alan that doesn't want to give up and that the real Alan Wake is at Divers Isle, currently lost in the darkness and going insane after completing his puzzles. Along the way to Divers Isle, Barry states that Alan has ditched him as a friend, feeling replaced with Zane and gets enraged.

Thomas Zane is mentioned during Control, in an audio recording of Jesse Faden attending therapy, when her therapist mentions having looked up Zane after Faden mentioned that one of his poems was her favorite in a prior therapy session. However the therapist could not find a poet by that name, only a European film maker also named Thomas Zane who had moved to America in the 1960s. Zane later briefly appeared before Alan during a cutscene in the second expansion of Control, AWE. He wore Alan's body instead of his divers suit, claiming his previous suit was just a costume from a movie he once wrote. While offering Alan a drink, he tried to elude Alan into writing his escape from the Dark Place, while also confirming he was dealing with Mr. Scratch in the real world.

According to the books found in Bird Leg Cabin by Alan Wake in Nightmare: 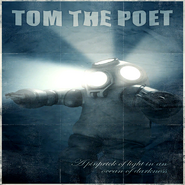 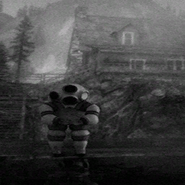 The old photo of Thomas Zane in the typewriter room 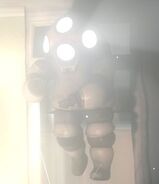 Zane in his diver form in-game, from the original Alan Wake game.
Community content is available under CC-BY-SA unless otherwise noted.
Advertisement