You don't even recognize me, do you writer? You think you're God? You think you can just make up stuff? Play with people's lives and kill them when you think it adds to the drama? You're in this story now and I'll make you suffer!

The Taken, or Shaded Individuals as they are known by the FBC in Control, are the primary enemies in the Alan Wake franchise. They are depicted as normal people, animals or objects with a blurry shadow surrounding them, obscuring their finer features.

The Taken are the remnants of people fully possessed by the Dark Presence, they are essentially mindless puppets that exist only to fight and serve the Dark Presence, they cannot be saved and must be avoided or killed. There are several different types of Taken, ranging from swarms of birds, to humanesque soldiers, to poltergeists. Taken fight with melee weapons such as blades, scythes, and axes, they can also throw their weapons to attack distant foes. Taken possess limited intelligence and do not appear to coordinate attacks as groups. They fight viciously and without mercy, and can lie in wait to ambush targets, but will retreat from powerful light sources. Oddly, Taken tend to recite garbled and occasional words from their past lives, but these are often senseless and little more than mere 'nerve twitches', the possessed person still reacting to various situations with out-of-place speech. Taken can appear anywhere the Dark Presence can focus itself, often appearing out of thin air to attack and kill with little warning.

The Taken are protected by a Dark Shroud, a field of shadows and smoke around them that negates harm. Taken are effectively impervious to weapons fire, strikes from motor-vehicles, even explosions while their Shroud surrounds them. They have only one natural weakness: light. Weak sources of light will destroy their Shrouds leaving them vulnerable and strong sources can kill them outright. Finishing them with a fire-arm is a simple matter once their shield has been negated.

Human Taken are Humans who have been possessed by the Dark Presence, which 'takes' them. The word 'Taken' in fact, in used to imply that the people they were before are absent, and they are now only a hollow shell mind-controlled by the Darkness. While they still look much like their former selves, they are shrouded in darkness. The Taken are murderous, mindless puppets and cannot be saved. Unlike Zombies from classic horror genres, the Taken can move at the same speed as ordinary Humans and in some forms, superhumanly faster. Taken also retain the ability to speak occasional, mindless, words, but the only thing close to emotion they carry is the feeling of the Darkness which fully engulfs them. Their choice of weapons are work tools such as knives, crowbars, axes, tire irons, chainsaws, shovels, wrenches, pickaxes, and sledge hammers. Taken attack by either throwing their weapons at Alan, or meleeing him directly. In order to defeat them, you must first burn away their protective shroud of darkness with a light source. Taken can then be killed with conventional weapons. However if a light source is particularly powerful, such as the flare gun or flashbang, Taken are destroyed instantly. Taken carefully avoid any large light sources, and if Alan can locate one (from a generator or a streetlight), the Taken will be unable to reach or harm Alan. Taken come in several varieties. Typically, the small ones move fast but take less damage whereas large Taken are slower but withstand more punishment.

There are many types of Human Taken:

Small, agile and fast moving Taken. They wield sickles and knives and attack rapidly - often attempting to outflank Alan. They are easily destroyed, usually taking only one bullet from the revolver. However, two or three Flankers can dispatch of you very quickly if they get in close, especially on higher difficulties.

The most common troop of this cursed army, the Average Taken attacks by throwing weapons such as knives and hatchets before closing in to engage in melee strikes. They take a fairly low amount of damage, two or three revolver rounds, but can be deadly if Alan is pre-occupied fighting other enemies.

A variant of the Flanker Taken that move at incredible superhuman speeds. While on the move, they appear just as a blurred outline, as it is almost impossible to keep the eye trained on them. Wait for the foe to stop before peeling back its armor with a light source. Don't shoot until you have a fixed bead on them, or a fair bit of ammo will be wasted. A riskier tactic is to wait for them to strike, then dodge and fire at them. However, this requires perfect timing.

The shock troops in the service of Darkness, these man-mountains are huge, and are shrouded in more thick layers of darkness. In life, they were laborers and timber workers, and so wield heavy duty weapons such as axes and sledge hammers. They do not retreat from weak light sources and so constantly moving is a must if you do not possess stronger weapons. Flashbangs and flare guns are the most effective light sources, whilst shotguns and hunting rifles are the best conventional weapons. When they take damage, they often enter beserker rage and charge.

These are incredibly strong Taken that wield chainsaws. They have the strongest darkness shrouds and so take huge amounts of damage. Their shrouds also replenish themselves if they aren't taking damage. A strike from the chainsaw can result in instant death. Use flashbangs, flare guns, hunting rifles and quick feet to destroy them.

The tornado form is a very rare variant of Taken. Only two are encountered throughout the game, the first being the transformed Hitchhiker in Alan's dream. The second is one that appears several times throughout the story. It is assumed that the tornado is the corporeal form of the Dark Presence. At one point Alan is attacked by and pulled into the tornado. He manages to ignite a flare, damaging the tornado which then throws him out and into Cauldron Lake. The only time Alan confronts the tornado form in combat is towards the end of Episode 6: Departure, where the only way he can defeat it is by firing flares into it. The tornado form is usually the form Barbara Jagger takes, so all the times it has been spotted have most likely been her. The only time it definitely wasn't her was in Alan's dream.

Invisible Taken appear in The Signal. They act just like normal Taken, but they cannot be seen as easily. The telltale sign of an Invisible Taken is heavy breathing, gradually coming closer. Also, the more you shine your light on them, the more solid they become, making them easier to spot. Once the player has destroyed the shroud of darkness protecting the Taken, they become visible.

Just like their human counterparts, some ravens were possessed by the darkness. While they aren't very dangerous individually, they have huge strength in numbers. Ravens usually attack in flocks and can pose a real threat, especially on narrow mountain paths or when facing other Taken. They have been known to destroy helicopters by flying into the rotors. Ravens are difficult to hit with conventional weaponry but are incredibly sensitive to light, and so can be destroyed with the boosted beam of a flashlight, or better yet, a shot from the flare gun. There is an achievement for killing 1,000 of them called If It Flies, It Burns for 20 gamerscore.

These raven-like books appear in The Signal DLC, they behave and sound like the ravens, except they are white books from Alan Wake's Alex Casey novels, the only difference between them and the ravens is purely aesthetic. They might symbolize how Wakes' life was partially ruined by his own books and career, and that he lives in self-doubt.

The poltergeist form is where any item of any kind can suddenly move and try to attack you. This is caused when the darkness enters an object, causing it to move. Whatever the object is, if it hits you, it can do a great amount of damage. Items that attack you can vary from very small and less harmful objects (such as a chair) to huge and dangerous objects (such as a tractor). The way to defeat these is to use your light on them, but unlike the Bird Taken, these take a little more light to destroy. You need to shine your flashlight on them and burn away the darkness animating the object, and the size of it will depend how long it takes you to burn it away. The stronger the light power, the quicker you stop the object from doing more harm.

Not a Taken as such, but it acts as trap, where walking into it causes instant damage. The only way to destroy it is to use anything light-based. These "sludges" come in varying sizes and appear in many episodes.

These Taken was introduced in Alan Wake's American Nightmare. They are humanoid Taken capable of transforming into clouds of ravens, during which time (unlike normal raven flocks) they are impervious to harm and cannot attack Alan. In human form, they possess no dark shield, but are agile, strong, and remarkably resilient to harm.

These Taken was introduced in in Alan Wake's American Nightmare. They possess no shield, but possess high health and, when targeted by a flashlight, will split into two weaker Splitters, each of whom can also split apart.

These Taken was introduced in Alan Wake's American Nightmare. They have low health and a dark shield even weaker than that of flankers, but they have a long ranged attack in the form of a thrown grenade. Aesthetically, the grenade resembles a flashbang, but its explosion is replaced by a small blast of darkness. The blast can damage fellow Taken.

These Taken was introduced in Alan Wake's American Nightmare. These are rather large Taken, and share their stats with assault Taken. They carry all types of weapons, such as pickaxes and large hammers. Under their biker jackets, they also wear Old Gods of Asgard t-shirts.

These Taken was introduced in Alan Wake's American Nightmare. They are easily the physically largest of all the humanoid Taken, heavily muscled to the point of malformity. They carry massive concrete-saws, and possess dark shields and large amounts of health.

These are people who have been mentioned or seen in the story who have turned into Taken:

Below are the characters that were killed or presumed to be killed by the Taken, but it is unsure if they are or were Taken.

Throughout encounters with the Taken, they sometimes say random one liners. Why they do it is unknown, but it's probably just to torment Alan. It is noted in a manuscript that the taken speak as it is an echo of the former being left within the body.

Below are the achievements that involve the Taken in one way or another. 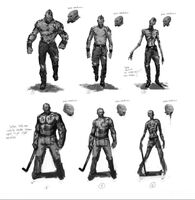 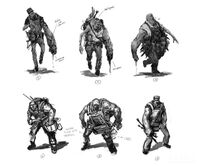 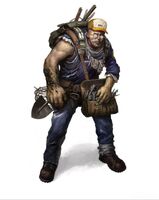