Wake, I'm gonna trust you with this.

Sarah Breaker is the sheriff of Bright Falls and a protagonist of Alan Wake.

Her compassion and understanding contrasts with FBI agent Robert Nightingale's shoot first attitude and her understanding of the "crazy" happenings of the town makes it easier for her to believe in Alan Wake's dilemma. Notably, she also admits to having read and liked all of Alan's novels despite her initial nonchalance towards the writer. Surprising for a Sheriff of a small town, Breaker can also fly a helicopter. Sheriff Breaker has more than enough experience in law enforcement. She worked with the FBI Forensic Branch for a number of years before becoming Sheriff of Bright Falls.

After Alan Wake reaches Stucky's Gas Station and phones the police, Sheriff Breaker is the first police officer on the scene. To her, Alan seems mentally unstable, initially keeping her hand above her gun holster just in case. However, she takes him into custody but not as an arrest. On the way to the police station, she stops by Cauldron Lake and watches with emotion as Alan panics. A while later, Breaker talks to Alan in her office, trying to gain a little more sense of what is going on. She helps him regain his composure and helps him find a place to stay and holds Alan back after he hits Emil Hartman in the face.

She is later seen with FBI agent Robert Nightingale, with whom she is uneasy. Breaker does not believe that Alan is responsible for what is happening, while Nightingale is hellbent on catching Wake at any cost. A few times she has to calm the trigger-happy Nightingale down.

Sarah Breaker later joins up with Alan when agent Nightingale puts him in custody. Nightingale is taken hostage by the Dark Presence and Sarah then lets Alan and Barry Wheeler out of their cell. Since the whole town has been overcome by the Dark Presence, she arms herself and Alan with shotguns, pistols, and flashlights and charges toward the dam to find Cynthia Weaver, the Lady of the Light. Barry later joins up with her and Alan and together, the three fight their way through hordes of Taken and Poltergeists. Later, she helps Wake and and Barry escape from the town by flying a helicopter away from the town and towards the dam, but Taken Birds bring down the helicopter and Alan is separated from her and Barry.

Sarah and Barry manage to fight off a group of Taken together and Alan finds them. The group continues to fight their way to the dam where they meet up with Cynthia Weaver who leads them to the Well-Lit room where the clicker lies. Alan takes the clicker and leaves by himself, but not before holding a gun to Breaker's head and making Barry take her gun away. Barry complies and takes her gun away. Alan leaves the group in the Well-Lit room.

Breaker does not make a physical appearance in the DLC. In The Signal she appears as a memory at the church. After Wake destroys the possessed deer float, Sarah unlocks the church doors and tells him to "run for it", which strangely did not actually happen in the real world. Earlier in the same episode, as Alan travels through his own dream he may stumble across a cardboard cut-out, similar to the one of him in the Oh Deer Diner. The cutout has Breaker on it, with an inscription. It appears to be advertising a book written by Breaker, detailing her life. Supposedly, the book talks of how "she balances being a small-town Sheriff and at the same time a librarian at the local book store."

Near the conclusion of the game, Mr. Scratch reveals to Alan Wake over television that Sarah still keeps in contact with Barry, though it's been two years since they last saw Alan. Barry is convinced that Wake is still alive but it is not revealed if Sarah feels the same.

"Did you know he's been hanging out with the sheriff from that shitty little town? They keep in touch." - Mr. Scratch on Barry and Sarah two years after Wake enters the Dark Place.

"Weaver Weaver, loony believer, scared that the dark is gonna eat her!" - The rhyme Sarah Breaker made up about Cynthia Weaver when she was ten years old. 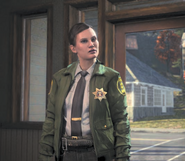 Sarah in the original version of Alan Wake 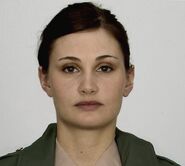 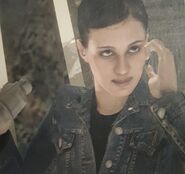