Welcome to the Oh Deer Diner!

Rose Marigold is a major character in both Bright Falls and Alan Wake.

She is a waitress, where she works at the local diner, the Oh Deer Diner, in Bright Falls. She also is a big fan of the writings of Alan Wake and keeps a life-sized cutout of him in the diner. In her spare time, she enjoys reading his novels and following news about him.

Rose is known to be a huge fan of Alan Wake, and other writers in general. She owns a trailer at the far back of the Sparkling River Estates and lives alone.

In the live-action series, Bright Falls, she first meets Jake Fischer when he enters the diner and starts to flirt with him when she realizes he is a reporter. Jake notices that she is a fan of Alan Wake, as evidenced by the cardboard cutout of Alan in the diner. When she next meets Jake, she becomes rather jealous of a woman named Ellen, who has come to the Oh Deer Diner to meet him. Despite this fact, she is still amiable to Jake whenever she meets him, and comforts him when he doesn't look well. Her final appearance is when Jake enters the diner, somewhat looking ill. Jake tells her a woman just bit a cop, and although she initially see's nothing, Mulligan enters the Diner with a bleeding hand, which Rose helps put pressure on.

When Alan Wake walks through the doors of the Oh Deer Diner, she barely acknowledges who he is until she looks up, and then begins gushing about being Alan's biggest fan. Annoyed with her enthusiasm, Alan groans and interrupts her by asking where he can find Mr. Stucky. When Alan leaves after receiving the cabin key and directions from the lady in black, Rose will yell out "Bye Mr. Wake!" in an excited tone.

Rose later encounters Barry Wheeler and Alan when they arrive at Elderwood National Park to rent a cabin from Rusty and at the end of the episode Taken when she invites Alan and Barry to her trailer to retrieve the manuscript pages Barry asked her to find for Alan. Unfortunately, the Dark Presence has brainwashed her into doing so and once they arrive Rose serves the two men drugged coffee, knocking them out until nightfall. On his way out of her trailer, Alan notices Rose rocking back and forth (reciting lines she might say to a customer at the diner), realizing that the Dark Presence used her to get to him. Barry, however, believes she turned against them on purpose and steals the cardboard cut-out of Alan she kept at the diner.

As depicted in The Alan Wake Files, FBI Agent Robert Nightingale tried to interview Rose after the events of the trailer park. During it, she found it quite hard to focus after being touched by the Dark Presence. She admits to Nightingale of hurting Alan and how a "woman in black" made her do it. The interview ends with her breaking down crying.

At the end of the game, she is seen carrying a lantern, just like Cynthia Weaver did, with former FBI Agent Nightingale watching her from the darkness behind. 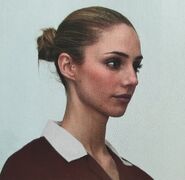 Rose's reference photo - without her hat

The early version of Rose's character