Pat Maine is a character who appears in Alan Wake. He is the local radio host of Bright Falls KBF Radio.

Pat Maine hosts the town's local nightly radio shows, which can be heard by Alan Wake at various points in his adventure. He also takes a disliking to FBI Agent Nightingale's tenacious pursuit of Alan, claiming that he needs a "lesson in manners and a boot up the ass".

Though he never physically appears, he appears in episode two early in the morning where he talks about the meaning of Deerfest.

Pat plays a fairly minimal role in the events of Alan Wake. He is the first local who Alan meets - being on the ferry which Alan rides on at the story's beginning. When Pat recognizes him for who he is, he requests an interview which Alan denies. Later, when Alan is at the Bird Leg Cabin, Pat can be heard on the radio mentioning that an unnamed celebrity has arrived to enjoy the Deerfest. However Alan's anonymity is destroyed when Rose Marigold phones in and excitedly exclaims his presence in Bright Falls. Throughout the game, Pat's radio show can be heard on radios particular locations. These extracts include music, interviews and call-ins from locals.

In Episode 3: Ransom, Pat's radio station becomes Alan's goal of refuge when running from the police. He breaks into the sound room and requests to speak with Pat, right before Agent Nightingale shoots unexpectedly at both of them through the window. Later, Pat can be heard in more radio broadcasts referencing to the shooting and professing to be on Alan's side of the dispute.

In Episode 5: The Clicker when Sheriff Breaker asks Barry Wheeler to phone a group of locals and inform them of the trouble with the code word "Night Springs", Pat's name is notably on the list. When asked why that codeword, Breaker explains that it is an inside joke about how Bright Falls is sometimes just as weird as the TV show.

At the very end of Episode 6: Departure, Pat is one of the locals who can be seen celebrating the Deerfest.

MAINE: Against my better judgment. You realize that the only reason I'm talking to you at all is because Sarah asked me to?

MAINE: Agent, I'm not going to take any abuse from you. Not after our last encounter.

NIGHTINGALE: Listen, that was all a misunderstanding.

MAINE: No, it wasn't. No. It was reckless, dangerous, and stupid and you were in no condition to be working.

NIGHTINGALE: Look, I'm... can we just concentrate on this interview, get it over with? Please, sit down.

MAINE: All right. What do you want to know?

NIGHTINGALE: What did Wake want with you?

MAINE: I have no idea. We really didn't have any time to talk. I thought he dropped in for an interview. We met on the ferry when he and his wife were coming to town, and he wasn't interested in one then. I said he should look me up if he changed his mind. It would've been a bit of a catch, especially with the Deerfest coming up. A celebrity would attract people outside the immediate area.

NIGHTINGALE: That's not why he was there.

MAINE: He said that. He couldn't say what he wanted before we were interrupted. If I hadn't said he was at the studio on the air, things would probably have gone differently.

NIGHTINGALE: Trust me, you got lucky. Wake's trouble.

MAINE: Really. I think I'm a fair judge of character, Agent Nightingale, and that's not the impression I got.

MAINE: I did wonder if he had anything to do with the situation at the trailer park, but it seemed so unlikely. I suppose I was wrong about that. Even so, I really can't imagine that anything Mr. Wake has done could be worth all this effort.

NIGHTINGALE: You probably can't. Me, I don't have to imagine.

NIGHTINGALE: It is ominous, Mr. Maine, trust me on that. It's no joke. I've seen things you wouldn't believe.

MAINE: You should consider the possibility that your experience doesn't make you an expert, or improve your judgment. It may not make you as unique as you think.

NIGHTINGALE: What do... are you telling me that you know what Wake is up to? Is that it?

MAINE: I don't know anything about Mr. Wake. Perhaps if you were to tell me what he has done...

NIGHTINGALE: That relates to an ongoing investigation. I can't discuss it with you.

MAINE: Or the sheriff, or anyone else, it appears.

NIGHTINGALE: You're friendly with the sheriff, huh?

MAINE: This is a small community. Agent Nightingale, it's obvious that you have no idea what you're doing. I'm not trying to offend you. I'm just trying to tell you something important.

NIGHTINGALE: Please, Maine. You know something. I... I need you to tell me. I need help here.

MAINE: Frankly, I'm not prepared to discuss that with you. I'm sorry, Agent Nightingale, but I don't trust you.

NIGHTINGALE: But you trust Wake, is that it?

MAINE: I really don't know him at all. But he seems to be less of a loose cannon than you are.

MAINE: Get out of here. Just get the hell out. 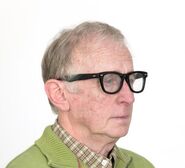