Nightmare
The Clicker
The Signal

The Triple D's Oh Deer Diner is a diner found in Bright Falls. It appears in both Alan Wake and the Bright Falls mini-series.

Jake Fischer enters the Oh Deer Diner where he reads some articles about Dr. Emil Hartman. He meets Rose Marigold and remarks about the paper cut-out of Alan Wake in the diner. She explains that she "likes writers". Although he didn't order anything, he receives an abundance of food. He then leaves the diner.

Jake arrives in the diner a second time to meet Ellen Adams, an ex-work colleague and friend of his. Rose seems jealous of her, despite Jake being in a relationship.

In this episode, outside the diner, a woman named Shel Dyke seems to have been touched by the Dark Presence, trying to destroy the lights at the diner. Deputy Mulligan tries to stop her, only to end up getting bitten by her. Jake cannot believe what he is seeing and walks into the diner and tells Rose on what has just happened. For a moment, she cannot see anything until Mulligan pulls up in his car with Shel going crazy in the car. He walks over to Rose and tries to stop the bleeding. Jake watches an advertisement of Deerfest, only to have another vision and end up in a body bag.

Alan Wake first visits the diner when he is looking for Carl Stucky, to obtain the keys to his cabin. He's told that Stucky is in the bathroom, but once he gets there a woman named Barbara Jagger tells him that Stucky was ill and couldn't make it, and gives him the keys and the directions to the cabin instead. It is here that Alan first meets Rose Marigold, Cynthia Weaver, Rusty and the Anderson Brothers.

In Night life in Bright Falls, Alan can return here. The Diner seems to have been left unlocked at night, and the Open sign is still lit up. This could mean that since Rose was touched by the Dark Presence, she was supposed to come into work and lock the doors, but she never did.

In the special, Alan first enters the diner to find it just like the first day he arrived in Bright Falls, except everyone is translucent. While they are talking, they would be cut off by a strange noise. Alan head's to the bathroom for an unknown reason he cannot recall, where he encounters Thomas Zane in the men's bathroom mirror, who provides him with a gun and flashlight. When he leaves the bathroom, everyone is gone and there are TV's on the counter and on the seats. The TV's turn on and tell him that he has to fight for his life. Then suddenly, Taken appear in the diner and he fights them.

A chef at the Oh Deer diner 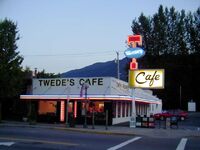