It's my life! It's mine!Mr. Scratch

Mr. Scratch is a doppelgänger of Alan Wake. He first appeared at the end of Alan Wake and it is implied he was created by Thomas Zane, possibly as part of the balance. However in Alan Wake's American Nightmare Mr. Scratch states that after Alan disappeared all that was left were the wild stories about him allowing Cauldron Lake's ability to use art to shape reality to make the stories true, thus creating Mr. Scratch; Alan Wake as the stories portray him. The true purpose of Mr. Scratch is unknown, but it is implied that he returned to the surface of Bright Falls while Alan Wake was writing the ending to Departure at the bottom of Cauldron Lake. It is probable that Mr. Scratch was supposed to return to Barry Wheeler, Sarah Breaker, Cynthia Weaver and Alice Wake, but his reasons and purpose are still unknown. Whenever a character refers to Mr. Scratch, the sound of the word "Scratch" is muffled out, replaced by either static or appropriately, a record scratch.

He was first mentioned in Departure after Alan destroyed the tornado. Alan saw him under the lake when Thomas Zane explained what Alan must do to defeat theDark Presence. He appeared to Alan and the two touched hands, with Alan extremely uncomfortable at this. Mr. Scratch smiled at him, but does not say anything. Scratch then disappears. Zane offered no explanation, other than, "Your friends will meet him when you're gone".

In The Writer, Zane tries explaining to Alan what is happening in the Dark Place. During the conversation, Alan asks Zane if there are two of him (one in the cabin going crazy and the one you are playing as), to which Zane replies "Yes." Alan then asks if Mr. Scratch is him as well, which Zane very bluntly and darkly replies "No." Alan does not know what to make of this.

In the Alan Wake Files, Clay Steward sees a man who looks very similar to Alan Wake. When Steward chases after him, the man looks at him and smiles very secretively. The man then turns around a corner and disappears. Due to the mysterious nature of this individual, it is very likely this was indeed Mr. Scratch.

Mr. Scratch plays a much larger role in Alan Wake's American Nightmare, where he is the main antagonist, the "herald of darkness," as opposed to Alan, who is "the champion of light." He torments Alan throughout the game, occasionally appearing physically in Night Springs to taunt Alan, generally summoning swarms of the Taken as he does so, but more often appearing through messages he leaves for Alan inside televisions. In these short videos, Mr. Scratch is seen casually hurting, torturing, and even murdering innocent people, taunting Alan the entire time, as well as "sharing personal moments" with him, such as an examination of the weapons he uses to commit murders, and discussing his vile plans for Alice in the future. His creation is revealed in "The Genesis of Mr. Scratch" page, which explains that the power of Cauldron Lake created him from all of the dark rumors about Alan that people made up over the years. These rumors and stories, under the influence of Cauldron Lake, took on a life of their own in the form of Mr. Scratch. In the end, Alan managed to seemingly destroy Scratch with the use of a drive-in theater projector, by having it play "Sunrise" - a movie Alice had created based on one of her happiest memories of Alan, spending time with him and watching a sunrise. The purity of this happy memory, as well as the power of the light of the sun captured on the film, were enough to burn Mr. Scratch to ashes. As he disintegrated, he screams in denial, "It's my life, it's mine!", obsessed to the end with the idea of murdering the man he was based on and then taking his place, taking over and subsequently destroying Alan's life. Before he burned away, the Alan seen in the movie was dressed in the suit worn by Mr. Scratch. After the monster had died, however, the on-screen Alan was suddenly wearing the exact same outfit the real Alan wore, as he had summoned those clothes from that same happy memory in order to protect himself, as mentioned in "The Clothes".

In Expansion 2: AWE, Alan tells Thomas Zane that Mr. Scratch is "out there", and Zane responds that he is "dealing with him." A photo of Mr. Scratch can be found in the game, seemingly taken by Alice in 2017.

In an interview with Sam Lake, he says the reason he is named Mr. Scratch is because his name is unpronounceable by humans as it sounds just like a bunch of scratching noises. He is the main antagonist in Alan Wake's American Nightmare and is the most sadistic and twisted character in the franchise. 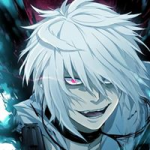