Imaginary Barry appears in both special episodes of Alan Wake, The Signal and The Writer. He first exists in Alan's mind in the very last form he saw Barry in (with Christmas lights and a headlamp).

In The Signal, after realizing he is completely alone in the Dark Place, Alan suddenly encounters this false version of Barry Wheeler, who provides him with company and the same kind of banter the real Barry engaged in with Alan, giving him insight on the world he is in. However, since he is just an idea of Alan's given shape, and has no real physical form, Not-Barry can't fight or tell Wake anything that Wake does not already know, or explain anything that Alan himself does not fully understand. Barry appears to know more about the situation than Wake can grasp. Throughout Wake's journey through the world of The Signal, Barry appears to give Alan tips and insight. When the DLC ends, Barry is not seen or mentioned.

Imaginary Barry does make appearances in this DLC, but his role is kept to a minimum. When Wake starts his second journey through the Dark Place , Barry helps remind Alan that the world is different, and things can quickly change. But when Thomas Zane shows up, Barry disappears sulkily. He does not reappear until the very end, when Alan has finally reached Bird Leg Cabin. Barry, standing on top of large pillars of rock raised from the ground, tells Alan that he is depressed. When Wake asks why, Barry says that he feels replaced by Thomas Zane as Alan's friend. The next time he appears, Barry tells him that Alan will have to erase all the fantasies of the Dark Place, and that Not-Barry himself is one of them. Alan is at first very passive of this, as he asserts Barry isn't even real. An angry Barry appears again, now with the familiar voice distortion of one of the Taken, and darkly informs Alan that the only way he is getting through to the cabin is through him.

Suddenly, the world begins to change shape once more around Wake. The cabin becomes covered in shadows, and the Taken version of Not-Barry stands on the roof. Taken copies of people Alan knew from the real world such as Emil Hartman and the Anderson Brothers begin to swarm Alan, all while Barry shouts at Alan of how the writer's tumultuous lifestyle in the real world affected his. Alan manages to survive this, and he then battles with multiple clones of Barry who each wield a timber axe. Alan manages to finally gun Imaginary Barry down, freeing the cabin and free himself from the paranoid state to beginning his new story -- Return. 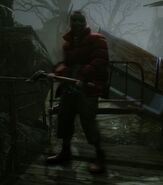 Barry, appearing to Alan as a Taken