Time Flies is the second episode of the Alan Wake prequel live action mini-series, Bright Falls. This episode was released on the Bright Falls website on 27 April 2010.

After experiencing a collision between his vehicle and a deer which quickly vanished into the night, a baffled Jake Fischer drives towards the Mountain Air Motel. He parks his car in front of the lodging and notices a man smoking in the dark. The man, Sam Smith, and Jake walk inside the motel where Sam's son Daniel is sitting at the front desk. Jake notices the collection of hunting rifles on the wall and is given the key (attached to a cup) for his room. Sam also tells him to pay up on time, and to pay in cash.

Upon reaching the entrance to his cabin, Jake remarks to Sam on the unusually quiet surroundings and inquires as to what Sam has done with the noisy 'critters'. Sam quips in fashion that Jake should be more concerned with the quiet animals and unlocks the cabin door. Walking inside, Jake scans the room quickly and sprawls out on the bed. Observing the sound and rotation of the ceiling fan, he soon falls asleep. Hearing a noise, Jake immediately opens his eyes and stands up. He parts the room curtains and finds that night has become day.

It cuts to Jake driving through town, listening to Pat Maine discussing the upcoming Deerfest. Rose Marigold, local waitress in the employ of the Oh Deer Diner, watches an interview of Alan Wake as Jake walks in the door. The two have an extremely brief chat before Ellen waves him over to her table. Expecting a warm greeting, Ellen is slightly rebuffed by the cold professional handshake conveyed by Jake. The two sit and banter about Libby, Jake's wife, as well as Jake's business in Bright Falls. Receiving a page or text message on her phone, Ellen reciprocates Jake's earlier handshake and departs.

Jake leaves the diner as well (not shown) and arrives at the office of Dr. Hartman. As Jake prepares for the interview as previously discussed with Hal, Hartman walks into the room and objects to a camera set up for the interview, instead asking Jake to simply write the exchange down on paper. The interview starts unremarkable, however Jake soon fixates on an image affixed to Dr. Hartman's wall and shortly thereafter experiences a series of odd visions. When Jake snaps out of it, Hartman is escorting Jake out of the room. Confused by his hallucinations and experience of lost time, Jake heads back out on the road and tries to suss out exactly what just happened to him.

As Jake is driving, he calls an unreachable Hal and attempts to leave a message. While doing so, he examines the notepad used at the interview, covered in notes he does not remember writing, and finds the third page filled with strange scribblings, and a drawing of a severed deer head. Looking to the side of the road, Jake notices an unidentified individual walking along with a deer head in one hand.

You cannot corrupt me

You will not abandon me ever again

This time people will notice

EMBRACE ME OR FEAR ME

NO MORE LIGHT IT IS HUNGRY FOR MORE

and vessel NO DO NOT RUN

THANK YOU FOR MY SUFFERING

TO come back and for this reason I am at peace

I HAVE ALREADY ARRANGED MY LEGACY

Sam: Toilet backs up, jiggle the handle. Card machine is down, so it'll have to be cash.

Sam: Pay up on time.

Jake: Is it always this quiet out here? What did you do, get rid of all the critters in the woods?

Sam: It's the quiet ones you need to worry about.

Radio: This is Pat Maine on KBF-FM. Some people have asked me "What's the big deal about Deer Fest?".

Radio: I think that this sums it up. It's about friendship and community.

Alan (video): Yeah, that's mainly what the book is all about.

Jake: You ever sleep?

Rose: (shakes head) I wondered why she was wearing makeup.

Jake: (holds out hand) It's great to see you again.

Ellen: Great to see you too. Sit.

Jake: How are things?

Ellen: The same. Please don't ask me about the weather. How's Libby?

Jake: Good. You know, the same.

Ellen: Well, which is it - good, or the same? Forget it, don't answer. You're here for business.

Jake: Yes... the standard 'below the fold puffery'.

Ellen: Well, what did you expect? It's Bright Falls.

Jake: You know, I never figured out why you moved here.

Ellen: No, I guess not. (phone alerts) you know, I've actually got to run... deadlines.

Ellen: If you need me, you know where to find me?

Ellen: (holds out hand) It's great to see you again.

Hartman: What have you got there?

Jake: That's my camera. I use it to record interviews, if that's OK.

Hartman: You're a writer, aren't you?

Jake: So maybe you could start by telling me what inspired your book, 'The Creator's Dilemma'.

Hartman: For years, I dealt with patients who seemed lost - trapped in a reality of their own devising.

Hartman: Can you imagine? Neither could I. Until I began to think of their dilemma as the universal one.

Hartman: ... really just about people. Nice chatting, Jake. If you need anything else for your article, let me know.

Hal (message): Hey, this is Hal. Leave a message. 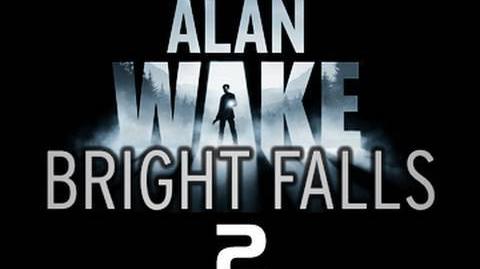