Oh Deer is the first episode of the Alan Wake prequel live action mini-series, Bright Falls. This episode was released on the Bright Falls Website on 27 April 2010.

A man wearing a diving suit appears from under a lake, dragging himself and an unknown object onto a boat. He deposits the object on shore, opening it up to display an assumed corpse inside the previously submerged body bag. The diver steps back onto the boat and heads out toward water. Looking at the bag again, we see that the body is suddenly gone.

In the next scene, a car is traveling on the road in a heavily wooded area. Jake Fischer is speaking via cellphone with his colleague Hal. The two converse about a third person named Riley who may or may not surprise them in the near future with unknown news pertinent to both men. This dialogue suggests that Riley might be the boss of Hal and Jake, and that the surprise will center around possible instability at their place of employment (the company is never actually mentioned; it could be a newspaper or magazine). Describing heavy interest by Riley in an unnamed book, Hal expounds to Jake upon the importance of an upcoming interview which might negate their troubles. Jake's wife Libby is also brought up in conversation by Hal, as he has seemingly been covering for Jake to Libby in his absence.

Jake arrives at the Oh Deer Diner and reads through articles about Dr. Emil Hartman, oblivious to the strange looks given to him by the other occupants of the Diner. Rose Marigold, the local waitress and soon-to-be revealed super fan of Alan Wake, has a short but flirtatious conversation with Jake regarding his intentions in town and the decor of the restaurant. A brief interval later, Jake is given food which he did not order and a birthday cake, complete with lit candles and a song.

Afterward, Jake returns to his car and uses a GPS device to find the Mountain Air Motel at 65500 Piper Road. While in transit, Libby calls him on the phone and provides distraction enough for Jake to inadvertently collide with a large Deer on the road. Taking a flashlight with him, Jake exits the vehicle to determine exactly what has happened. The deer can be heard breathing heavily in pain; when Jake turns on the flashlight and points it towards the animal, the Deer bellows loudly. The light fails and the animal runs off into the woods. Jake then resumes his travels, and shortly thereafter drives past a Deerfest sign.

Jake: There's not going to be anyone left.

Hal: You're a dying breed. Jake, lighten up; we need the interview. You know Riley loves the book.

Hal: Oh, and make sure to get him a signed copy.

Jake: Are we done?

Hal: I'm running out of excuses. Hello. Are you there?

Jake: Sorry you had to deal with that.

Hal: Have you been home?

Hal: She, uh, didn't know you were going to Bright Falls.

Jake: Guess she does now.

Rose: So, what are you - a detective or a peeping tom?

Jake: Uh, both. A reporter.

Jake: Interesting choice of decor you have there.

Jake: I can see that. 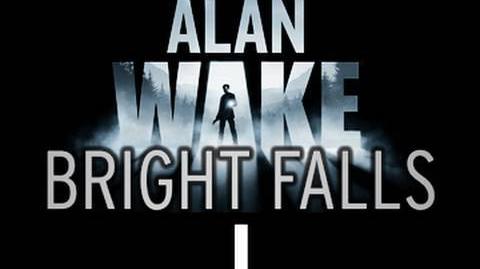