It's all in your head... you've been making it up!

Dr. Emil Hartman is an antagonist of Alan Wake, and of the second expansion of Control, "AWE".

He was a psychiatrist and former writing assistant who worked in Bright Falls, Washington for much of his life. Hartman was aware of the supernatural powers of Cauldron Lake, and sought to study and exploit them using troubled artists in his clinic at the Cauldron Lake Lodge.

Hartman is known for his book, The Creator's Dilemma. In 2010, Hartman invited Alice Wake to bring her husband, Alan, to Bright Falls under the guise of offering psychiatric care; in reality, Hartman sought to take advantage of Wake's talent and use him to influence Cauldron Lake.

At some point in his early life, Hartman moved from his former home in Vermont to Bright Falls, Washington, where he became the assistant of Thomas Zane, a poet who lived in the Bright Falls area. Through Zane, Hartman discovered the power of Cauldron Lake to turn works of art into reality, becoming obsessed with it. When Zane's lover, Barbara Jagger, mysteriously drowned in Cauldron Lake, it was Hartman who convinced Zane to use Cauldron Lake's power to write her back, with disastrous results; the Dark Presence possessed Barbara, and Zane erased himself and Barbara from reality.

Hartman continued to study the phenomena occurring in Bright Falls for years thereafter, eventually converting the Cauldron Lake Lodge to a clinic for the ostensible purpose of helping tortured artists recover from mental health issues. Whilst in Bright Falls he has written two books, the first titled Creative Flow. His most recent book, The Creator's Dilemma, described his unorthodox methods and claimed that treatment at the Cauldron Lake Lodge was the only viable option for tortured artists to recover from their dilemmas. In reality, Hartman's lodge was his testing ground in which he attempted to use artists as subjects to manipulate reality using Cauldron Lake.

A reporter, named Jake Fischer came to Bright Falls in order to interview Hartman about his book, The Creator's Dilemma. Originally Jake was going to record the interview using a camera, but Hartman insisted Jake write notes on the interview instead. From Hartman's perspective, the interview went off without a hitch, though this was a different experience for Jake.

A couple days later, Jake returned to Hartman initially to get a signed copy of Hartman's book. Jake then confided in Hartman about waking up in weird places and seemingly killing a deer. Hartman initially invited Jake to stay there at the Cauldron Lake Lodge where he could help him, but as Hartman is shining a torch in Jake's eyes, Jake freaks out over the brightness and runs out of the lodge; Hartman, however, looked on with interest regarding what transpired.

Hartman was eventually contacted by Alice Wake, who sought therapy for her husband, Alan, a bestselling novelist experiencing extreme writer's block. Hartman deemed Alan an ideal candidate and invited Alice to take Alan to his clinic. When Alan and Alice disappeared, Hartman was furious, realizing that Alan's writing was already beginning to influence reality. When Alan resurfaced, Hartman had his lackey, Ben Mott, lure Alan to them by claiming to have kidnapped Alice and demanding Alan's manuscript. However, Mott was soon killed by the Dark Presence, and Hartman took matters into his own hands, kidnapping Alan and taking him to the Cauldron Lake Lodge.

Hartman claimed to Alan that he had suffered a psychotic breakdown over Alice's death, which had caused him to conjure up imaginary supernatural events. Alan, however, did not believe Hartman, and attempted to escape. In the process, the Dark Presence attacked Cauldron Lake Lodge, trapping Hartman with it. However, Hartman was able to escape from the Dark Presence, and later aided local law enforcement in defeating a Taken Ben Mott. Hartman lamented the loss of Wake as a prime candidate for his experiments, but continued his work in studying Cauldron Lake.

Following the events of Alan Wake, the Federal Bureau of Control investigated Bright Falls and uncovered Hartman's actions and research. While Hartman wished to form a partnership with the FBC, the Bureau found Hartman to be in violation of paranatural law, and detained him. While Hartman was eventually released due to being considered a low-level threat, his research was kept by the FBC. Desperate, Hartman finally resorted to diving into Cauldron Lake himself, resulting in him being Taken. The FBC quickly apprehended Hartman and brought him to their headquarters, the Oldest House.

Inside of the Oldest House, Hartman was kept in the Bright Falls AWE area of the Investigations Sector. However, when Alice Wake was brought to the Oldest House for an interview, Hartman sensed her presence and escaped, forcing the FBC to lock down the entire sector. In 2019, the Oldest House was invaded by an extradimensional entity, the Hiss, which was of similar nature to the Dark Presence. The Hiss and the Presence met and amplified one another inside of Hartman, "stretching" him into a monstrous form. Hartman was ultimately killed by FBC Director Jesse Faden. 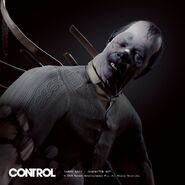 Emil as he appears in Control's AWE
Community content is available under CC-BY-SA unless otherwise noted.
Advertisement