Sometimes staying out here just gets into your head

Ellen Adams is a resident of Bright Falls. She makes her first appearance in the Bright Falls mini-series.

Ellen Adams recently moved to the town of Bright Falls. She works for a newspaper called The Bright Falls Record, presumably as a reporter or editor.

Ellen first appears in Episode 2: Time Flies as she meets with Jake Fischer. They make idle conversation at a table before talking about their work. Not long into this meet, Ellen then has to run off to work.

In Episode Three: Lights Out, Jake then reached out to her at the The Bright Falls Record about weird hallucinations he's been having and how he's been waking up in strange places. Ellen tells him that a place like Bright Falls can get intom a person's head, but does tell him to leave because of the fact.

In Episode Six: Clearcut, Ellen is talking to Hal outside the Bright Falls Record when Jake suddenly pulls up in his car, and asks Ellen to drive him outside of Bright Falls as he is "not in control". After they pass the "Welcome to Bright Falls" sign, Jake blacks out and finds himself now driving the car. It is not known exactly what happened to Ellen, but a blood covered shoe in the back of Jake's car hints he may have done something to her.

Although she does not appear in Alan Wake itself, she is mentioned in The Signal special downloadable content under the cardboard cutout for Cynthia Weaver, where it mentioned that Ellen was an intern for the The Bright Falls Record under Cynthia's editorship. 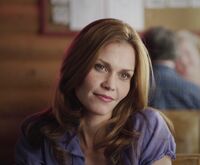