While its origin is unknown, this is where Alan Wake's journey to Night Springs begins.

In this motel are few hidden secrets including the "Diver" word in the background, where Alan was first seen with a new weapon "the nail gun", and that "Night Springs" is just 15 miles away.

The Desert Shore Motel makes up one of three main areas found in Alan Wakes American Nightmare. It is made up of the Desert Shore Motel, a nearby diner, as well as a neighboring gas station. Also closeby is a rail station, oil field, and train tunnel. The gas station serves as a truck stop, as such, several tractor trailers can be found parked out front.

A concept art for the scrapped 2010 version of Alan Wake 2, which was eventually used for the Desert Shore Motel 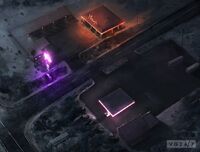