Young man. I've been waiting for you. For a long time.

Cynthia Weaver is a character in Alan Wake. She usually goes around carrying a lamp, to keep all the darkness away. She is obsessed with light.

Cynthia has lived in Bright Falls all her life, and used to work for The Bright Falls Record for many decades. During the 1960's, she had an infatuation with Thomas Zane, often jealous of his spouse, Barbara Jagger.

She is the initial mysterious lady who appears at the Oh Deer Diner, worried about Wake getting hurt in the dark hallway that leads to the diner's restrooms. She is constantly seen holding a lantern and is easily frightened by the dangers of the darkness. The residents of Bright Falls have labeled her as the "town eccentric", due to her obsessive maintenance of the town's light-bulbs. Before she became obsessed with the light, she used to be the editor of the local newspaper, but focused on "other things".

It appears that Cynthia was actually somewhat manipulated by Thomas Zane and is also known as 'The Lady of the Light'. She exists to conflict with the Darkness throughout Bright Falls by providing its buildings with plenty of light bulbs and living in the town's power station, so as to remain forever in the light. She has also held feelings for Thomas Zane, this can be seen in Episode 3: Ransom where she writes Thomas' nickname "Tom" and love hearts all around the basement of an abandoned house with light-sensitive paint. She has also confessed that "a part of her" was happy when |Barbara drowned in the lake.

Cynthia sees Alan as a foolish man; she probably knew Alan had tried to revive Alice but instead gave darkness power. Though she says that Alan is smarter than Thomas.

In Episode 5: The Clicker, Cynthia's role and purpose are fully explained - including how she is protecting the legacy of Zane in the "Well-Lit Room". She has been protecting the clicker, an artifact given by Alan's mother and written by Thomas Zane. She has been preparing for Wake's inevitable battle against the Dark Presence: all of the hidden caches left behind, the seemingly abandoned power company trucks filled with supplies, even the messages left behind in the unique light-sensitive paint.

Her forced obsession with light is shown at its peak in the Well-Lit Room: hanging lights have been arranged in such a way as to allow NO shadows at all. She even keeps a systematic mental log of the light-bulbs position, brand and model for easier maintenance and she constantly replaces the bulbs despite saying that she was "tired" of all of it. 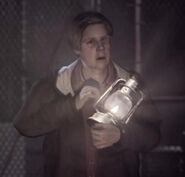 Cynthia Weaver in the original version of Alan Wake 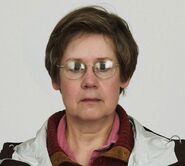