Cardboard Cut-Outs are one of the main collectibles in the Alan Wake DLC Special 1: The Signal. They also play a role throughout the game as an iconic feature of the famous writer, Alan Wake.

"The all-father! The trickiest geriatric with the wittiest gimmick! The deranged patriarch with the trademark tangent! Crazy... like a fox. Dig?

The enduringly popular star of the hit reality series "Barry Wheeler Presents: "New Tricks for Old Gods," blasts out his latest masterpiece, guaranteed to please gourmands everywhere -- "Moonshine: It's What's for Dinner" is available in all fine bookstores! Also available as a modestly priced limited edition with annotations and commentary by Barry Wheeler. Phlegm fans, take note: coming soon as an audio book!"

Her debut book, "The Only Girl in the Bookhouse," delves deep into the double life of having a successful law enforcement career while being involved in a secret society. How does daddy's little trooper fit into an old-fashioned fraternity?"

"The literary agent with the constant ailment! The frantic sidekick with the hectic rhetoric!

The owner of the most fashionable jacket ever made and the author of the indispensable guide to would-be agents everywhere, "Blood From a Rock: When The Goose Starts Goldbricking," presents a new collection of short fiction by Alan Wake! Included are classics like "Errand Boy," as well as numerous mortifyingly clumsy early works buried deep in the disappeared writer's files. Never intended for publication? That's not the Wheeler way! Get yours now!"

"The lady of the light! The cloud of the gloom in the Well-Lit Room!

Weaver's difficult and uncompromising life is illuminated in "Cynthia Weaver: Carrying the Torch," an enlightening and occasionally harrowing biography by Ellen Adams, who was an intern at the Bright Falls Record under Weaver's editorship."

"The god of thunder! The boozing geezer with the anger and the hammer! Come one, come all, face the age of murder and storm!

Discovered by Barry Wheeler, this fresh new voice from a bygone era suggests new and innovative solutions to old problems. Don't you dare leave your bookstore without the best-selling self-help book, "You're All Nails To Me"! Foreword by Barry Wheeler."

"The nyctophobic beauty with the muse-ariffic booty! The soothing oasis in the seething crisis!

The renowned and award-winning photographer's new coffee table book features intensely personal and intimate images from a life haunted by a husband who was never there. "Writer's Muse" -- pre-orders accepted now." 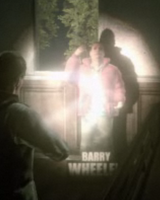 Retrieved from "https://alanwake.fandom.com/wiki/Cardboard_Cut-Outs?oldid=25477"
Community content is available under CC-BY-SA unless otherwise noted.