This page is about the fictional town of Bright Falls. For the promotional miniseries, see Bright Falls mini-series.

This would make a wonderful setting for a book.

Bright Falls was built as a small mining town near Cauldron Lake to support the workers of a nearby mine. It is located in the state of Washington. It soon developed into a tourist attraction due to the popularity of the Elderwood National Park. It is the setting for both the mini-series Bright Falls and the game Alan Wake .

In 2010, renowned writer Alan Wake came here with his wife Alice for a vacation away from his recently troubled life back home. Many bizarre events have occurred in and around the town of Bright Falls, mostly related to the Dark Presence, which happens before and during the events of Alan Wake.

Native American tribes have inhabited the area near modern-day Bright Falls for thousands of years. It is not recorded when Bright Falls was first founded as a nameless trading post, but its first real significance came when the Bright Falls Coal Mine opened nearby in 1878. The company turned the small trading post into a town with its own money to provide the miners with entertainment and a place to stay. Shortly afterward, it was turned into a real town when Hubert Biltmore, a Washington fur trapper, came to the mining settlement. He opened a post office, saloon and a hotel and ran it as a joint operation with his partner, Amos Gunderson, a Tacoma pioneer. The two of them shared the proceeds and erected a monument in their own honor within the town park. Through their combined efforts, the two men expanded Bright Falls into a more permanent and thriving area.

Bright Falls is located near Cauldron Lake, the fourth-deepest lake on Earth, located in a volcanic caldera. At the bottom of Cauldron Lake is a worn place in reality that leads to the Dark Place, an alternate dimension of thought and imagination. As a result, artistic works created near Cauldron Lake can come true; however, alien beings from within the Dark Place may attempt to take control of these writings in an effort to invade the real world. In 1970, poet Thomas Zane came to Bright Falls and wrote stories and poems alongside his lover Barbara Jagger and assistant Emil Hartman. However, after Jagger drowned, Hartman convinced Zane to write her back to life. The Dark Presence, an entity from the Dark Place, used Zane's writing to come to life and possessed Barbara's body. Zane was able to banish the Dark Presence by writing himself out of reality, causing a volcanic earthquake in the process.

In 1976, musicians Tor and Odin Anderson (Old Gods of Asgard) were also involved with the Dark Presence, with it using their music to attempt to come to life. The Andersons were also able to banish the Dark Presence. Over the years, Hartman began to gather artists at his clinic in the Cauldron Lake Lodge in an attempt to harness the forces of the Dark Place. As a result of the strange events that transpired in Bright Falls, a correspondence was made between local residents and police officers to investigate these phenomenon. The code word "Night Springs" was used, a reference to the popular anthology series which Bright Falls is jokingly considered to be the inspiration for.

In 2010, writer Alan Wake and his wife Alice came to Bright Falls on vacation, and the Dark Presence (wearing Barbara's skin) kidnapped Alice, using her as a ransom to force Alan to write it into reality. Alan was able to defeat the Presence's influence by writing Thomas Zane into the story, who helped Alan escape. Alan then fought his way through Bright Falls and eventually reached the Clicker, a magical device Zane had written into reality to help Alan defeat the Dark Presence. Alan then dove back into Cauldron Lake and used the Clicker to seemingly destroy the Dark Presence. In the process, however, Alan was trapped in the Dark Place.

Every year, Bright Falls celebrates an event from September 15-18 known as Deerfest. The festival exists in competition with the neighboring town of Watery's Moosefest. In the Bright Falls church, one of Deerfest traditions is having lit candles every night in September until the end of Deerfest. 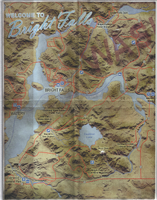 Map of Bright Falls - the town and its surrounding areas

One of the streats in Bright Falls

Forest road leading to the town of Bright Falls

Bright Falls in the reveal trailer of Alan Wake 2
Polski
Community content is available under CC-BY-SA unless otherwise noted.
Advertisement