View source
watch 01:36
We're Getting Mutants in the MCU - The Loop
Do you like this video?
Play Sound

I want the entire manuscript, or she's gonna' suffer BAD.

Ben Mott is an antagonist of Alan Wake.

He was an employee at the Cauldron Lake Lodge hired by Emil Hartman to do his dirty work, where he was used as the false kidnapper of Alice Wake in order to make Alan Wake give him the manuscript.

Not much is known about Mott's early life except that he used to work under the eye of Emil Hartman at the Cauldron Lake Lodge.

Mott is first seen on the ferry ride in Episode 1 in the back of the ferry. He keeps to himself and doesn't say much, though mumbles a threat under his breath to Alan, which Alan does not hear.

Later on, when Alan Wake is at the police station in Episode 2, he calls Alan. Mott tells him he is the kidnapper. Even though he does not have Alice, Mott uses recordings from an audio tape and splices them together to make it sound like Alice is on the other end. Mott gives Alan instructions to meet him at the Lover's Peak lookout for the ransom. On the mountain, Mott and Wake fight against a large number of Taken together. Alan uses flares and a flashlight to weaken them, while Mott guns them down. Eventually, they clear out the Taken and talk.

Mott tells Alan that if he wants to see Alice, then he must give him the full manuscript of Departure in two days or else he will kill Alice. Wake, furious, punches Mott in the face and they both fall from a platform. Mott manages to escape from Wake.

Eventually, Wake, however, cannot finish the manuscript. He decides to go to the meeting area and torture Mott into giving him Alice back. But things go awry when Mott calls Wake and tells him that there is a new meeting spot, at Mirror Peak lookout. Wake, furious, fights his way up the mountain. But when he gets to the top, he hears Mott screaming pathetically. Mott is admitting to Barbara Jagger that he never had Alice. He and Hartman just wanted the manuscript. He pleads for his life.

Wake finds Mott on the lookout. Mott is bleeding and is on his knees, whimpering and breathing heavily. Suddenly, the Dark Presence asserts itself and starts a large tornado. The tornado pulls Mott into the air, tearing him apart, killing him in the process.

Mott appears again in the Psycho Thriller comic book where it is revealed he turned into a Taken. One day after the events of Episode 4: The Truth, he appears at Cauldron Lake Lodge trying to kill Nurse Sinclair, all confused with some of his mind still in tact, but Emil Hartman manages to rescue her and ward Mott off. Mott gives chase, and in the process kills one of the lodge residents, Rudolf Lane. Mott then encounters Emil by the sundial at the lodge, where he is eventually killed by Emil and Deputies Mulligan and Thornton.

Mott on the Ferry

For Mott, spying on the writer on the ferry had been a disappointment. His boss had made Wake out to be something special, but Mott hadn't been impressed.

He'd gotten a good, long look of the wife, though and liked what he saw. Mott had fantasized about goading Wake into a fight, but it hadn't happened. Still, he'd get his chance to see if the writer had anything in him.

He'd been promised as much.

Mott had checked all of Stucky's rental cabins. There had been no sign of the Wakes. It was dark when he'd found their car parked at the end of the road by Cauldron Lake.

It made no sense. They must have taken a wrong turn, but there was no sign of them, and the car had been there for hours already.

Frustrated, Mott stood on the rotten ruin of the footbridge that had once led to Diver's Isle, before it sank beneath the waves years ago. The boss wouldn't be happy.

Mott knew that Wake was smarter than him; Wake had more money, a beautiful wife, everything. And Hartman said Wake was important. That made him better than Mott. But Mott was calling the shots now. He'd expected Wake to whimper and grovel, but instead, he seemed willing to fight. Mott knew he'd gotten under Wake's skin.

If only Mott actually had his wife. The thought made him shiver.

Hartman wasn't happy. Mott could see it in his eyes. He quickly lowered his own: he'd made a mess of it, and he knew it.

The shame of failure was hard to bear. He hadn't expected Wake to say he needed more time, and he'd blurted out "two days," less than Wake had asked for, to show him who was in charge.

But that wasn't part of Hartman's plan. 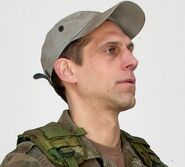