Barry Wheeler is a protagonist of Alan Wake.

He is Alan Wake's best friend and also his literary agent. He is a very typical New Yorker, high-strung and high-powered. Barry suffers from allergies, including dust, grass, pollen, and small towns. Barry is a good friend and despite his allergies and his protests he travels to Bright Falls when he senses that Alan Wake needs him. He is the first person Alan relates the strange events to and initially Barry doesn't believe him. However, Barry soon witnesses the Darkness ripping through the forest and is attacked by Taken Birds. He survives this encounter. He also appears in the DLC's in the form of Imaginary Barry.

Barry Wheeler was born in New York and has been Alan's best friend since childhood and as Alan wrote as a teenager, Barry became his literary agent. For years, Barry has helped Alan write and even though Alan suffers from his writer's block, Barry still tries to poke ideas out of him. Alan looks at Barry as a true friend as he has been there for him from an early age. Also, Alan has said that Barry has never let him down in the Manuscript page called "My Best Friend" from the story, "Return".

Barry is a good friend and despite his allergies and his protests he travels to Bright Falls when he senses that Alan Wake needs him. He is the first person Alan relates the strange events to and initially Barry doesn't believe him. However, Barry soon witnesses The Darkness ripping through the forest and is attacked by Ravens.

When Alan and Alice are on the boat to Bright Falls, Barry calls Alan to check up on him, to ask if he's settled in yet. Smelling money, he asks if the town has got his "creative juices flowing". He also shows concern about Alan's privacy and offers to intervene if the locals are hassling him too much. After a small conversation, they both hang up.

Barry first bodily appearance is at the police station, having come to Bright Falls to help Alan after a week of not answering his messages and to see what is going on. After threatening to "sic his lawyers" on Dr. Emil Hartman and Sheriff Sarah Breaker, he leaves the station with Alan. After hearing Alan Wake's story of what has been happening in Bright Falls, he thinks Alan has gone crazy. But when he hears that Alice has been kidnapped, he decides to just let Alan follow through with his plans.

Later on, he comes to believe in Alan's story when he is attacked by a large flock of Taken birds. Alan manages to save him and he apologizes to Alan for "thinking he was having a psychotic episode". Deciding to help his friend, he finds all the information he can about Cauldron Lake and all the strange happenings in the town. As the threat of the Dark Presence becomes more and more present, he arms himself with Christmas lights, a headlamp, and a flare gun.

We last see Barry with Sheriff Breaker and Cynthia Weaver in "The Well-Lit Room." He sheds some tears when Alan leaves to fight The Dark Presence and save Alice Wake. Barry wishes Alan good luck and stays in the room. After Episode 6, Barry's whereabouts are still unknown.

Barry does not appear in either of the special chapters, The Signal and The Writer, which take place entirely in the Dark Place, but Alan is accompanied at times by "Imaginary Barry", a figment of his imagination in the form and personality of Barry Wheeler.

Not much is known about Barry's role in the game. All that is known is that he is now the manager to the Old Gods of Asgard. He is first seen in the game sleeping in a motel room somewhere in Arizona before the camera switches to the TV for an episode of Night Springs. In Episode 4 of Alan Wake, Barry had said (sarcastically) that once everything was over, he was thinking of taking on the Old Gods; maybe by selling some merchandise and releasing a new single. After the credits, the TV turns to static and Barry wakes up saying "Al?" 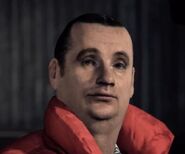