Alan... thank you for coming here with me.

Alice Wake is a character of Alan Wake.

She is the wife of Alan Wake. She is a well-known and accomplished photographer. She designed the covers of Alan's books and also does his promotional shoots. Alice notably keeps all the lights on, a result of her nyctophobia: an acute and irrational fear of darkness. Her disappearance is the main plot point of the game and a driving factor for Alan.

Alice was born on the 24th November 1979. She first met Alan when he worked as a night watchman and eventually married. The two had a very turbulent marriage in some ways, seeing as Alan sometimes suffers from depression or writer's block. Alice also has a fear of darkness, otherwise known as nyctophobia. According to Alan, she feels that darkness is in a way something awful and something that you could "feel or touch." When in darkness, she usually stays completely still in horror until the lights come back on.

On March 21, 2006 she was due to open up her own exhibit, named "Inflammator", though it is unknown if this ever went ahead.

One day, Alan came home after a party drunk and upset. The two had a short fight, which ended with Alan apologizing and asking her if she would like to go on a vacation. She agreed, so two years later the couple decided to take on a quiet getaway to Bright Falls.

Alice only briefly appears in a car alongside Alan Wake as they are driving into Bright Falls.

We first see Alice Wake on a ferry ride with her husband, Alan, that leads into Bright Falls. She and Alan have come to Bright Falls on a getaway vacation. During the ferry ride, she takes pictures of the scenery and her husband. After riding into town, they purchase some flashlights to help with Alice's crippling fear of the dark. She and Alan arrive at Diver's Isle: A beautiful house that sits on an island within Cauldron Lake where they will be staying. Alice is amazed at the beauty of the island.

Shortly after settling in, Alice tells Alan to come upstairs, where she reveals a surprise for him in the study. A typewriter and pages. Alan hasn't written anything for two years and Alice sees their vacation as a good way to get his creative juices flowing. Alan, infuriated, storms out of the house with a flashlight. But as soon as Alan leaves, the lights in the house go out and he hears Alice screaming in fright. Alan runs back into the house, terrified. When he goes through the front door though, he looks out and sees a glimpse of Alice in the water surrounding the island. Alan dives in and blacks out.

Later on in the story, Alan finds out that Alice was kidnapped by a man named Ben Mott, a go-to guy working for the doctor Emil Hartman. The ransom for her is the full manuscript of Departure that Wake wrote but has no memory of writing. Wake does this but eventually learns that Mott never had Alice. He told Alan that they had Alice so he would play ball with them and deliver the manuscript. Instead, the Dark Presence is holding Alice at the bottom of Cauldron Lake. Alan sets out to save her using the clicker.

Eventually, Alan overcomes the Dark Presence and rewrites the ending to Departure. This time, he rewrites it so that there is a balance of good and evil and everything has a price. In the ending he writes, we see Alice swimming up from the lake.

Alice crawls onto the shore and looks around and looks unharmed. After calling Alan's name a few times, the camera fades away from her. What exactly happened to her is left ambiguous and up for interpretation.

Alice makes a few appearances in The Signal, all hallucinations from Alan. From time to time, words will fly up around Alan that says "memory". When Alan activates them with his flashlight, Alan will hear her voice in his head from occasions when the couple had sex. Alan is, of course, happy to hear this. She also makes a physical appearance in his dream when Alan turns a corner and sees her taking pictures of a shadow of himself. Alice does not acknowledge the real Alan, but the shadow Alan talks to her instead. Alice disappears shortly thereafter.

"Memories" in The Signal (DLC)

Alice is heard, along Alan's journey to "follow the signal," after burning away the words entitled "memories".

Alice isn't upset in any of these memories. The proof is in her voice as she's talking to Alan. She sounds happy and playfully laughs with him at some parts.

"I thought this was my side of the bed".

"They're waiting for us downstairs, we don't have time for....Alan!"

"Hey, lover. Come here, I've got something for you".

"Memories" in The Writer (DLC)

Alice's memories are quite different this time, and a lot more cruel and harsh. The first one can be heard on a "recording" during the illusination of TV Head Alan, and the second one can be triggered later on burning away the word "memory".

Alice appears throughout the game via various media. It's learned that in the time she's been without Alan, she's made a truce with Barry Wheeler. She's also put together a film called "Sunrise" about being married to Alan. The film was set to premiere at the Night Springs Film Festival. Although she believes Alan to be dead, Barry believes the contrary. She doesn't actually appear until the end of the game when she sees Alan standing in front of her, where they hold each other and share a kiss, though it is believed to just be part of Alan's fantasy while stuck in the Dark Place.

In an interview with Alice by the Federal Bureau of Control in 2017, she stated she had nightly "visitations" from her missing ex-husband in her New York apartment. While she does not believe this is Alan himself, she believes it is using his face to scare her. She tries to keep the lights on at night, however her hallway lightbulb breaks every night and she loses sleep over these hauntings. Alice did manage to take a picture of the thing wearing Alan's face.

Alice, as seen in the Bright Falls mini-series 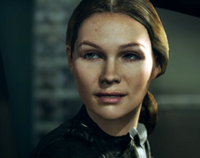 Alice in the original version of Alan Wake 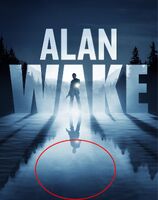