For details on the soundtrack for Alan Wake's American Nightmare, click here.

Alan Wake contains many songs from different artists. Below are all the songs found in the game and its mini-series, separated into various soundtracks.

The Alan Wake Original Score is the official score to the video game Alan Wake. There are a few songs that are related specifically to a certain level, but generally all of the songs have been featured in the whole game. Some of the songs have also been featured in the two Downloadable Contents, The Signal and The Writer. There are eighteen pieces in the score, and it is composed by Petri Alanko.

Most of the songs from the Collector's Edition are on the Official soundtrack, but  tracks 2, 5, 7, 8 and 9 are exclusive to this Edition.

Most of the songs from this Collector's Edition are on the Official soundtrack, but tracks 10, 12 and 13 are exclusive to this Edition.

These songs are also found in-game (e.g. within the talk radio broadcasts) but are not used in the credits and are not part of the official soundtrack. They can, however, be listened to through the Extras menu.

All the songs in the soundtrack for the mini-series, Bright Falls, are by Black Iris. All the songs can be found here, though due to Adobe Flash now being defunct, they can no longer be played via that website and cannot be found almost anywhere else. It is possible to still download them for free via the "Inspect" option through the website. For preservation purposes, the audio can be found below.

Concerning track No. 1, 'Northwest Passage' was the original title for the television show Twin Peaks, a show that has been stated by Remedy Entertainment as being an inspiration for Alan Wake. 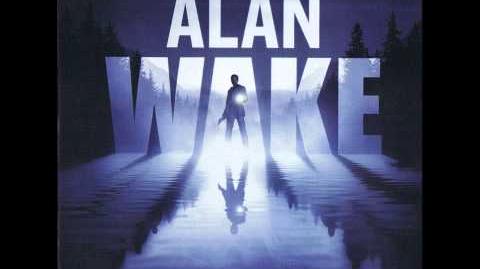